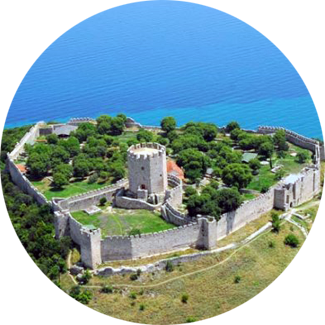 When someone travels by car on the Athens-Thessaloniki highway approaching Pieria, one thing is for sure; wherever one is (going up or down the road), the Medieval Castle of Platamonas will definitely grab the eye.

The Castle of Platamonas is one of the most beautiful and well-preserved castles in Greece. It is situated in the southeast of Mount Olympus, on the top of a hill above the sea, a location from which the main road connecting Macedonia to Thessaly can be controlled.

The Castle of Platamonas, which is around 10 centuries old, magnetizes the traveller with its imposing presence. Especially at night, the amazing illumination adds to its grandeur and appeal. The Castle of Platamonas is considered to be the hallmark of Pieria and one of the most significant landmarks in the area.

The Castle was built in the same place as the ancient city of Heraclia by Lombard Crusaders in 1204 and offered an overall control over the passage of Macedonia leading to Thessaly. After being seized by the Byzantines, it was conquered by the Turks in the 14th century. Owing to its strategic position, the Castle was not destroyed during the Ottoman Occupation. In 1770 it was conquered by the Greeks for a short period of time, as well as in 1825 and 1878, while it was also bombed in 1897 by Captain Stahtouris and abandoned by the Turks. During World War II, the Germans caused a lot of damage.

The Castle of Platamonas is well-preserved, hospitable and accessible to visitors. They have the opportunity to see the three main characteristics of medieval fortresses; the first compound, the second compound, which also constitutes the citadel, and the main tower. The outside wall of the castle is in a polygonal shape. It is fortified by three compounds and remains in a good condition. The outward compound is spacious and the entrance is in the southeast. On the same side, a bulwark in ruins can also be seen.

The Castle of Platamonas, thanks to its restoration the past couple of years, is not only frequently visited by thousands of history enthusiasts from all around the world but it also holds music concerts and cultural events in the summer. The Castle of Platamonas is nowadays under the auspices of the 9th Ephorate of Byzantine Antiquities and, with its consent, the Olympus Festival takes place there.

The height of its walls is nearly 9.5m on the right of the entrance and 7.5m on the left, while its thickness ranges between 1.2m and 2m. The magnificent octagonal tower rises on the northeast side and it is 16m high and 2m thick. For safety reasons, its entrance was located 2m above the ground and over its two gates there once was another tower which is nowadays ruined. The church of Agia Paraskevi (the only one still existing today out of the five that used to be there) can be found in the castle and it also used to function as a mosque during the Turkish Occupation.

When visiting the Castle of Platamonas one thing is certain; the visitor has the unique opportunity to enjoy the astonishing view of the sea and Mount Olympus.