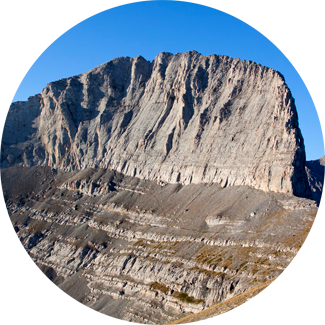 Olympus, the mountain of the gods. Words are not enough to express the magnitude of this magnificent natural monument. Its landscape, incredible images of wild life, and atmosphere make up a truely spectacular experience. It’s not by chance that it attracts thousands of people from around the world to visit it every year. It would be a shame for someone to visit Paralia or Katerini and not go up to Mount Olympus to see its glory. The scenery changes according to the season up in the mountain. There are many ways to spend your time during your visit, either mountain climbing, hiking, biking through the various paths or just enjoying the scenery and having a picnic. There is also the opportunity to decend gorges and to stay at one of the most organized shelters which can be found throughout the mountain area, Its truly an unforgettable experience.

Mount Olympus is the highest mountain in Greece. Its tallest peak Mytikas stands at 2918 meters. The mountain spans imposing between Macedonia and Thessaly. Rich in flora and fauna, Olympus was declared the first national park of Greece in 1938.It's main characteristics are its high peaks, deep gorges, platoons ridges, streams, deep caves and imposing cliffs. This characteristics are not only aesthetically impressive, but also leave a purpose for numerous species of wild life, who inhabit this unique ecosystem. It’s known to be home to tens of species of animals and birds and also 1500 plant species. There are many organized shelters and various paths for climbers and travelers who want to explore the high trees and mugged cliffs, or just to admire the grandeur of this mythical mountain. Visitors begin at Litochoro which is the town at the root of the mountain.

While at mount Olympus, it’s worth going up to the highest peak Mytikas or hiking to the grog of Enipea you can also take part in the annual marathon of Olympus, the Olympus mythical trail or Vrondou north Olympus trail.

The shelters of Mount Olympus
Throughout the area of the mountain our various shelters which provide accommodation and food. If someone decides to visit the shelters they must notify the authorities before commencing the climb.

Shelter ‘Krevatia’ (Vrondou)
This shelter is found at 1007 meters at the homonymous plateau in the North West side of Olympus. To be able to get to this shelter, you must go through the town of Vrondou and follow the dirt road leading from the holy trinity church. After it will take about 20 minutes to reach the shelter. The shelter has the capacity to host up to 20 people in the rooms. There is an organized kitchen which serves home style cooked meals and many delicacies. Leading from the shelter are various paths that one can follow, ranging from short cycle paths that lead you back to the shelter and longer paths which lead to the plateau of Mouses.

Shelter ‘Koromilies’ (Dion)
The shelter is found at 1000 meters high approximately at the point of Koromilia, Dion and mount Olympus, and faces out towards the gulf of Thessaloniki. There are two ways to the shelter. The first way is through the forest road Dion-Koromilia, which is 8.5 km or about 30 minutes by car. The other way is by the path which leads from the chapel of Saint Constantine and Helen, and runs parallel to the bank of the stream. The ascent of the path goes on for approximately 2.5 hours by foot. There is also the possibility to access paths leading to Petrostrounga and the plateau of the Mouses. The stream leading to Orlia is also accessible from this point. It's ideal for canyoning. This shelter has 17 beds and has an organized kitchen catering service.

Shelter A or ‘Spilios Agapitos’
The shelter is found at 2100 meters above sea level. The area is known as the balcony of Olympus. It can cater for 110 people and provides a restaurant, open from mid May to the end of October. It was built in 1931 and was given its name from the architect who designed it Spilios Agapitos.

Shelter B or ‘Vrisopoules’
This shelter is found 42 km from the city of Elassona and is situated in military facilities. Entering the facilities acquires a permit from the unit commander, identification cards are compulsory. The entrance to foreigners acquires specific permission from the special forces directory. There is also the homonymous ski resort which is found here and operates from December to March. Ski lifts are also available, but of course anyone who would like to use them must sign a declaration form stating they take full responsibility in case of any personal injury that may occur and don't hold the military of Greece liable in any case. The highest point of the slopes is at 2450 meters and the lowest is at 1900 meters. The entrance and accommodation to the shelter are free of charge as is the use of the ski slopes.

Shelter C or ‘Christos Kakalos’
This shelter is found at the edge of the plateau of Mouses at the height of 2650 meters.It has magnificent views towards the peaks and sea. Built in 1961 and later in 1964 was named after King Pavlos. In 1984 was renamed Christos Kakalos in memory and dedication to the first man to conquer the peak of Mytikas. This shelter can cater for 22 people and has an organized kitchen catering service. The manager Michalis Stilas lives on the mountain for most of the year and is in charge of the shelter. He is one of the nine climbers who accomplished to climb the highest summit in the world mount Everest in 2004.

Shelter D or ‘Stavros’
Built in 1969 this shelter has found close to Litochoro at the point Stavros where it got its name from.Its also known by tha name Takis Boudolas which is dedicated to the climber whom lost his life in 1985 while climbing the Himaliyan mountains.

Shelter S.E.O or ‘Yiosos Apostolidis’
This shelter is found at the highest point in Greece 2700 meters at the point Diaselo, its between the peaks of the profitis Ilias and Touba. The shelter is two story,the first level was built in 1961 after many efforts made by the climber Yiosos Apostolidis of which it took its name. The second level was built in 1964 it can cater for 101 people and also has an organized catering service. The shelter operates from 15th of June to 7th of October.

Shelter ‘Petrostrouga’
This new shelter is found at 1940 meters and is surrounded by dense forest. It caters for 72 people and also has an organized kitchen catering service. The volunteers of the rescue team, worked hard with care and effort for months restoring the shelter and transforming it into a warm and functional place.