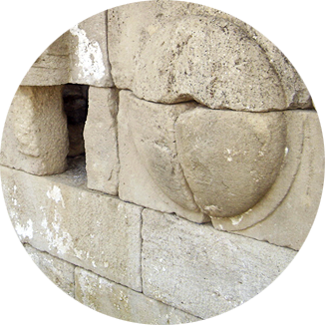 Ancient Dion is found in the shadow of mount Olympus next to the homonymous village of the state of Pieria and it is approximately 5 km from the sea. It covers an area of 1500 acres. The ancient site of Dion was a city surrounded by areas of worship and its settlements were known from the classical era up to early Christian times. Dion was not only a place of worship but also developed into a large significant city. Although it's rise and glory through the ages it began to decline and unfortunately lost its glory and almost erased of the map. The first official excavations of ancient Dion took place exactly after the liberation of Macedonia from the Turks, but essentially professor Dimitris Pandermallis is the one whom unearthed the ruins and grandeur of this magnificent city.

During the excavations, various layers uncovered private dwellings, state buildings, stores and workshops which were arranged in blocks of buildings separated by streets. The city is thought to have been built in the 2nd century b.c. on flat land and was a distance of 1.5 kms from the sea. The river Vafira connected the city to the sea and people had access to the sea in this way by rafts. Dion has one of the most beautiful archeological parks in Greece. A wonderfully planned archeological sight, where you can find ancient holy worship monuments, early Hellenistic and Roman theaters cobble stone roads, thermal baths and pools constructed with mosaic tiles. There is also a conservatory, Roman dwellings villas, early Christian basilicas, its truly one of a kind.

The thermal baths are found south of the archeological sight. This spectacular building complex is known to have been developed as early as 200 a.c. The interior is embellished with beautiful mosaic tilling. A special part illustrates the Tritons grabbing the Nerads. To the east we find the majestic villa of Dionysos with a large mosaic impression on the floor illustrating the God Dionysos. To the right of the entrance in the sight we find the great amphitheater of Dion, which comes alive during the summer months hosting the festival of Olympus.