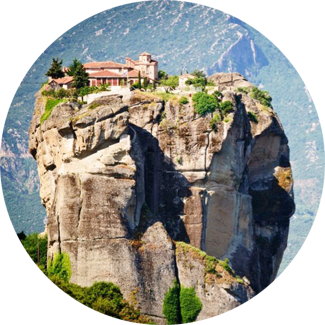 In central Greece and more specifically in the northeast part of Thessaly, just where the plain ends, gigantic rocks rise; a cluster of huge dark sandstone rocks, which create a unique, global maybe, spectacle.

These enormous rocks are neither mentioned in the mythology nor by a Greek or Foreign historian. Historians and geologists have engaged in studying the creation of these rocks for about one thousand years, formulating various theories. According to tradition, in times past, a vast lake used to exist, just where Thessaly lies today. A great earthquake split the mountains apart, so Tempi, a passageway between Mount Olympus and Mount Ossa, was formed. The waters of the lake flowed into the sea and Thessaly was turned into a plain.

According to the predominant theory of Al Philipson, a German geologist who came to Greece at the end of 19th century, a great river disgorged into this region, which for million years used to be covered by a narrow, yet deep sea. The river discharged clearing debris, such as stones, sand, mud and various other materials into the banks. These materials were drifted by the river from the northern parts of primitive central Europe. The rocks of the Meteora were created by the accumulation of these materials, which came together in order to form a single cone. About 25-30 million years ago, due to geologic changes through the centuries, the central part of modern Greece raised and the region of Thessaly sunk, forming a lake.Later on the passageway of Tempi was created and as a result the waters flowed into the Aegean sea and the plain of Thessaly was revealed.

The height of these giant rocks reaches up to 400 meters. It’s the second most important monastic complex, following that of Mount Athos. These rocks served as a shelter for several courageous hermits around 1100 A.D. They climbed and nestled like birds inside caves and hollow tree trunks seeking peace of mind, while they aimed at Christian Perfection through their prayers. The rocks stand between earth and heaven. At the beginning, the ascetics were isolated and used to pray in small chapels, the so-called “Prosefchadia”,
not only for their own salvation but for all the humans’, too. Their life was humble while their work was hard.

Barnabas is mentioned to be the first ascetic around 950-970 A.D. He founded the Skete of the Holy Spirit and then the Cretan monk Andronicus founded the Skete of the Transfiguration. Afterwards the Skete of Stagoi or Doupiani was founded around 1150-1160. Apart from these pre-mentioned Sketes, there were many more in various cavities around the rock of Doupiani, the Holy Spirit and also the rock of “Sourloti”. At the beginning of the 12th century a small monastic community had already been formed in Meteora. The center of Pilgrimage was the temple devoted to the Mother of God or else “Kyriako” or “Protato”, which survives to this day, south of the rock of “Doupiani”.

In the 14th century, Saint Athanasios of Meteora constituted the first organized monastic commune based on the regulations of the monasteries of Mount Athos. He founded the Holy Monastery of Transfiguration and changed the name of the big rock from “Wide Stone” to “Meteora”. Since then, all the rocks have been called Meteora. Subsequently, within the 14th and 15th centuries a lot of Holy Monasteries were created. That was the most prosperous period of monastic life in Meteora, as there were up to 24 monasteries.

A lot of treasures, heirlooms and artifacts are preserved at Meteora. The marvelous wood-carved iconostasis at the Holy Monastery of St. Stephen shall constitute a representative example of delicate work. Visitors can admire several exhibits such as portable icons kept in vestries inside the temples, Christian crosses made of the wood of Jesus’ crucifixion cross high-Priestly rods, as wells as brocaded vestments. Furthermore, holy manuscripts, Gospels, utensils and silver shrines are displayed there. From a historic point of view, what mainly stimulate interest are the over a thousand manuscripts as well as the valuable documents of the Byzantine and Post-Byzantine era, which are kept in the archives of the temples. The miraculous skull of St. Charalampos is kept in the holy Monastery of St. Stephen, while in the Monastery of Varlaam visitors can admire the Gospel attributed to the Byzantine Emperor, Constantine Porphyrogennetos.

The Holy Meteora is included on the UNESCO World Heritage List and other international organizations, as well. In 1995, it was pronounced a sacred place which was kept intact in order to ensure its Orthodox genuineness and effective protection. Over the centuries, the Holy Monasteries of Meteora have been remarkably active. They have offered a lot, not only to the Orthodox Monasticism and Church, but also to the Greek Nation contributing to the maintenance of our cultural tradition and heritage by performing major social work.